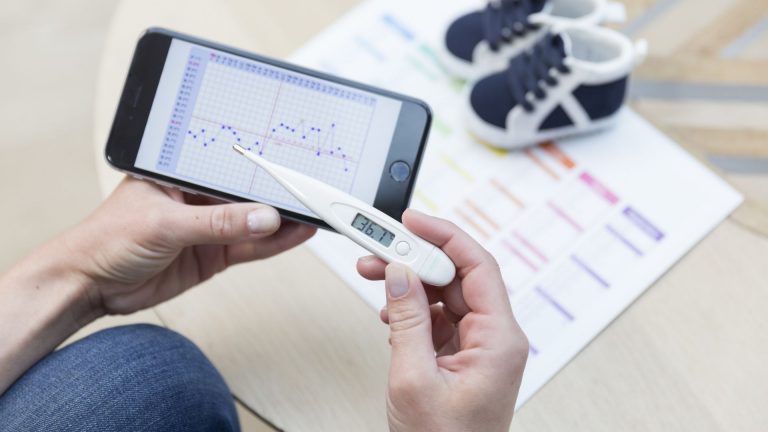 How is the basal temperature taken? Do it in 4 steps!

To take the basal temperature correctly and thus obtain the most reliable results possible, you must take the following steps:

By observing this graph, the woman can determine the day of ovulation, and, month by month, she can estimate the fertile days. That is when she is most likely to get pregnant. It is even possible to calculate the possible date of the birth of her child.

As we have already said, there is a rise in temperature during ovulation, and the luteal phase is entered. During this phase, therefore, a pregnancy may or may not occur.

The basal temperature at ovulation

Basal temperature values. Do you know how to interpret them?

Basal temperature values ​​vary for each woman, and the best way to learn how to interpret them is by taking a month-by-month record. When you’ve had more than three recorded menstrual cycles, you will be able to identify a regular pattern in your basal temperature.

This means that when your temperature rises in a specific stage, you will know that a few days before this increase will be a perfect time to have sex to increase the chances of pregnancy.

The basal temperature method can help when seeking pregnancy. It is a procedure that requires a bit of perseverance and discipline: put a thermometer every morning, observe the changes in vaginal discharge throughout the menstrual cycle and carefully write down all the information.

In addition, this method allows the woman to know better her own body: how long her menstrual cycle lasts when she is most fertile, why the vaginal discharge changes …
That’s how it works

Which thermometer is better?

How is body temperature related to fertility?

Body temperature goes through two phases: at the beginning of the menstrual cycle, it is lower, which causes ovulation; later, it rises, which gives way to the infertile period of the woman.

About three days after ovulation, the level of progesterone increases. This substance, also called the corpus luteum hormone plays a vital role in the nesting of the fertilized ovum and during the first phase of pregnancy.

Progesterone is responsible for the rise in body temperature a day or two after ovulation. When the thermal increase (from about 0.2 to 0.5 degrees Celsius) is recorded three days in a row, it is considered that the fertile phase of the woman in that cycle has ended.

The temperature remains higher for a minimum of ten days, after which it drops again, leading to menstruation. In some women, however, the body temperature drops again once the period has appeared.

By measuring body temperature, it is only possible to know if there has been ovulation. To know when the fertile period begins, you have to analyze the vaginal discharge or cervical mucus.

The most fertile period for a woman occurs before and shortly after ovulation. As sperm can survive in a woman’s body for up to five days, she can become pregnant if she has sexual intercourse five days before ovulation. After ovulation, the egg can be fertilized for between 12 and 18 hours.

Progesterone is vital for embryo implantation.
Why do you have to watch the vaginal discharge?

While the increase in body temperature is a reliable sign that ovulation has occurred, the characteristics of the vaginal discharge indicate the fertile and very fertile phases of the female cycle. To analyze the flow, the inside of the vagina must be felt and checked if it is dry, damp, or wet.

The appearance of the secretions must also be assessed. If they are whitish-yellowish in color and lumpy, the woman begins her fertile phase. When the discharge becomes apparent, even transparent, watery, and elastic (threads are formed when touching it and separating the fingers), the woman is at her most fertile moment.

Some women produce more discharge and can see it at the entrance to the vagina; others must insert their finger to extract a small amount.