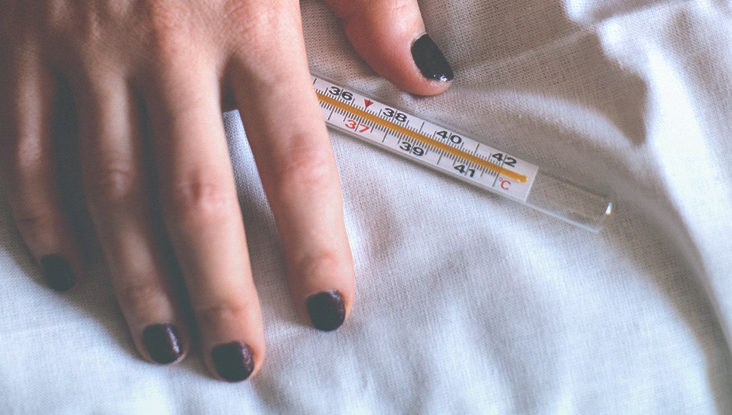 It is known as the “basal temperature” that the person has when they sleep, which is lower than at other times of the day since the body is inactive. Its importance lies in the fact that women experience a rise in their basal temperature – approximately two tenths – after ovulation and up to one or two days before menstruating. Therefore, keeping a daily record of basal temperature allows us to monitor our cycles, know their duration, regularity, if we always ovulate, etc.
How should it be taken?

To know the basal temperature, you have to do it at the exact moment you wake up after having slept between 6 or 8 hours and before doing any activity (not even drinking water, talking, or going to the bathroom). To take the temperature, a basal thermometer (recommended for its accuracy) is used, always the same, which we must leave within reach when we go to sleep, and which must be placed under the tongue, in the vagina or the right. The temperature should always be taken at the same time or recording if there was any variation. You also have to clarify if you had any illness at that time. It is necessary to record the temperature values ​​daily for at least three months to find a pattern.
What is the purpose of registering it?

When you have recorded the temperature for at least 90 days in a row, you can use various applications online or on your mobile to create a curve. You will notice that the days of the cycle with the lowest temperature are your “infertile” days and that ovulation occurs on the day the temperature rises. In the following months, you can take advantage of this information to conceive a baby: the ideal is to start having intercourse a couple of days before you usually ovulate, knowing that it can take 24 to 48 hours for the sperm to reach the egg and that this does not live more than 24 hours.
What other data can the method give?

Suppose your periods with elevated basal temperature are concise, or you do not observe variations in some cycles. In that case, this may indicate a problem with ovulation that you should consult with your doctor. Irregular cycles do not imply the impossibility of pregnancy, but they can take longer because you cannot accurately calculate when you are ovulating.

Finally, a high basal temperature that does not drop when it should (a day or two before your period) can be the first indication that you have become pregnant.

What is the basal temperature method?

At the beginning of the bare post-ovulatory stage, progesterone (the characteristic hormone of this stage) produces a thermogenic effect, increasing body temperature, keeping it elevated until your next period.
The fertile period covers a few days before and after ovulation, so the rest can be considered “safe” days to have sex without the risk of pregnancy.

Temperature measurement must be strict: every day, preferably at the same time, upon waking up after sleeping for a minimum of five hours in a row and before carrying out any activity, the woman should check her temperature with a thermometer and mark it on the graph.
In this graph, the horizontal axis represents the days of the menstrual cycle, and the vertical axis, the body temperature.

There are two different types of thermometers to measure basal temperature: on the one hand, we have the fertility thermometer (made of glass and mercury), similar to the clinical one but with the particularity that it only covers the range between 35 and 39 degrees, helping to detect minimal changes. It is necessary to be very careful in its use since it is very fragile.

It is also recommended always to have another spare. On the other hand, the digital thermometer operates on batteries and is more expensive, safer, and easy to read.

However, it has several disadvantages, such as that (like other natural contraceptive methods) it does not protect against AIDS and other sexually transmitted diseases and has a low level of effectiveness: since the temperature corporal can have variations for many causes, confusion can be generated to identify the precise date of ovulation.
Are you interested in getting pregnant and know all the methods to control the most conducive days to have sex? Did you know that there is a body control method based on the basal temperature that many women worldwide use to know which days they are most likely to conceive a child?

Here we explain how basal temperature is interpreted and answer the most frequently asked questions about this method.

basal thermometer woman
What is the basal temperature, and how to interpret it?

The basal temperature (TBC) is the temperature that a person’s body has when at rest, typically after having slept a minimum of five to six hours.

In the case of women, it offers relevant information to get pregnant, since, with this method, it is possible to know what her fertile days are or how long her menstrual cycle lasts, etc. Therefore, it helps you to increase your knowledge of how your body works.
The basal temperature in pregnancy

Next, we show you a graph that shows how the woman’s basal temperature varies according to the menstrual cycle phase in which she is.