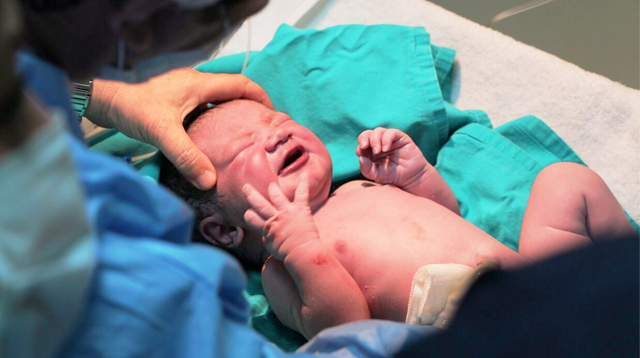 It does not need prior preparation since it is done at the minute of birth. The score will be zero if the parameters are absent and the skin is cyanotic (cyanosis is understood as the purple color that occurs in the skin due to lack of oxygen in it). It will be two if the heartbeat is more significant than 100, there is crying, the child moves actively, coughs or sneezes, and his skin is pink.

If the parameters are altered, it will be stimulated by rubbing, or oxygen therapy will be given if necessary.

The test is always carried out after cleaning the child’s nose and pharynx of possible birth remains.

All these maneuvers are usually done on a heat source since, in these first moments, the child regulates his temperature with difficulty and may have a drop in it if it is not done correctly.
Complications of the Apgar test

The test does not present any difficulty to perform, and it can only be considered a complication if the test result is less than 6, in which case it will be activated with rubbing or massage, administering oxygen if necessary, or evaluating more deeply.
Results

In theory, the test results are from 0 to 10, with the most normal values ​​between 8 and 10; below three, the child’s life is in grave danger. Between 4 and 6, it is moderate, and above seven, it is considered normal.

The results are of clinical evaluation; they will be put in the discharge report given to the parents to deliver to the child’s pediatrician, to whom this measure is valid.
Frequent questions
What is an APGAR 9 10?

The Apgar test oscillates in parameters that go from 0 to 10; when the parameters 9/10 are given, the baby had a parameter of 9 in the first minute, and at 5 minutes, a parameter of 10; these values ​​indicate an excellent condition of the baby at birth.
What is the Silverman scale?

The Silverman scale assesses the breathing difficulty of the baby as soon as it is born; it is advisable to assess the newborn with this test in the first hour of life if they are full-term and, in the first half-hour if it is preterm or premature babies.

It consists of seeing the nasal flutter (if you move the nasal flaps when breathing), the respiratory groan (if it makes a noise when breathing similar to a moan), if it presents intercostal pulling (It is the movement that occurs between the ribs) sternal retraction and thoracoabdominal dissociation (the baby’s chest and abdomen do not swell at the same time)

The score is from 0 to 10, with a value of 0 indicating that the child is breathing perfectly, and values ​​above 7 indicate that the child needs respiratory support, whether it be oxygen or even intubation.
What is the APGAR scale?

The Apgar scale is the values ​​from 0 to 10 stored in the newborn baby by applying the Apgar test, with 0 being a dire state and 10 being a perfect state.
What does the Ballard test assess?

The Ballard test is a method used in neonatology to make an indirect calculation of the gestational age of the newborn baby.

In this test, different physical and neurological characteristics are assessed, giving it a specific score. It may not help calculate gestational age in isolation, so it must be supplemented with other data such as the date of the last menstrual period and other parameters obtained by fetal ultrasound.
The APGAR test is the first test performed on newborns to assess their physical condition and determine whether they need immediate or urgent medical attention. It is carried out in the delivery room or on the ward if a cesarean section has been performed. The test gets its name from the five things it evaluates:

The test is usually done twice:

If the baby scores low on the five-minute test or any concerns regarding her condition, the test can be repeated one more time 10 minutes after birth.

The APGAR test score is measured on a scale from 0 to 10 and is calculated by adding 0 to 2 points for each of the five categories [link to the previous section with the five points]. Significantly few babies score a ten on this test.

Generally speaking, a baby is considered to be in good health if she scores eight or more. However, a lower result does not mean that the baby is not healthy or abnormal; it simply means she needs some immediate special care. Five minutes after birth, the APGAR score is recalculated; if this was low during the first evaluation and has not improved, or if there are other prerequisites
What does the APGAR score mean?

The APGAR score and height and weight measurements are just one of several tests performed on newborn babies. Parents must understand the APGAR test for what it is: a test designed to help doctors and healthcare professionals assess the general physical condition to determine if the baby needs immediate attention quickly. This test was not designed to predict a baby’s behavior, brainpower, personality, or long-term health.

But then why do nurseries, nurseries, and kindergartens request the results of the APGAR test?

Due to misinformation from educators. Many institutions request the results of various tests and indicators – among them, the APGAR test – before admitting a baby to their facilities; However, this score does not provide them with any information beyond the immediate care that the child may have needed after the birth of her – such as aspiration of the airways or oxygen to help him breathe. When a baby is old enough to enter a nursery, the APGAR score says nothing about her physical condition or individual characteristics.